Introduction to Dockerizing for Production

Improve your DevOps skills: learn an iterative process for Dockerizing your code.

Get your
free ebook

You’ve got a nice new Dockerfile, and it’s time to try it out:

So—now what? That log file isn’t on your host computer’s filesystem, it’s in the temporary image that build was creating.

How do you read that log file? Let’s find out.

That log file isn’t on your host computer’s filesystem, it’s in the temporary image that build was creating. In some versions of Docker you can access this temporary image, but not in the new and mostly-improved BuildKit build system. So we’re going to take a different approach.

Specifically, what we’re going to do is rebuild the image, disabling the failed line and all lines after it. Our Dockerfile currently looks like this:

We can now rebuild the image:

Now we can run the image, and then manually run the failing step, and since we’re inside the container we can also access the resulting log file:

And now we know the problem: apparently there’s a missing flux capacitor.

Once we’ve fixed the problem, we can uncommit the last line(s) of the Dockerfile and continue with the build. 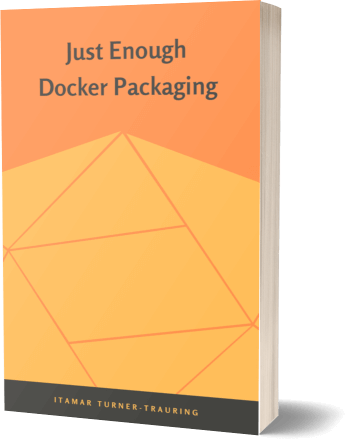 Want to quickly get up to speed on Docker packaging? This article is based on my book, Just Enough Docker Packaging, which will help teach you the basics of Docker packaging in just one afternoon.

Learn Docker packaging in one afternoon

You need to start packaging your Python application with Docker, and you keep hitting errors, from connection refused to OCI runtime complaints, because you don't really understand how it all works.

Spend an afternoon learning both the fundamental concepts and the practical debugging techniques you need: read my concise, practical book on Docker packaging.

Learn a step-by-step iterative DevOps packaging process in this free mini-ebook. You'll learn what to prioritize, the decisions you need to make, and the ongoing organizational processes you need to start.

Plus, you'll join my newsletter and get weekly articles covering practical tools and techniques, from Docker packaging to Python best practices.

Next: Faster or slower: the basics of Docker build caching
Previous: Connection refused? Docker networking and how it impacts your image