Whether it’s a data processing pipeline or a scientific computation, you will often want to figure out how much memory your process is going to need:

In the first case above, you can’t actually measure peak memory usage because your process is running out memory. And in the remaining cases, you might be running with differents inputs at different times, resulting in different memory requirements.

What you really need then is model of how much memory your program will need for different input sizes. Let’s see how you can do that.

When you’re investigating memory requirements, to a first approximation the number that matters is peak memory usage. If your process uses 100MB of RAM 99.9% of the time, and 8GB of RAM 0.1% of the time, you still must ensure 8GB of RAM are available. Unlike CPU, if you run out of memory your program won’t run slower—it’ll crash.

How do you measure peak memory of a process?

On Linux and macOS you can use the standard Python library module resource:

On Windows you can use the psutil library:

This will return the peak memory usage in bytes.

For simple cases, then, you can just print that information at the end of your program, and you’ll get peak memory usage.

What happens if you can’t actually run your program to completion, or if you expect multiple inputs size with correspondingly varied memory requirements? At this point you need to resort to modeling.

Let’s consider an example, a program that does image registration, figuring out two similar images are offset from each other in X, Y coordinates. In general, we’d expect memory usage to scale with image size, so we’ll tweak the program to support different image sizes, and have it report peak memory usage when it’s done:

We can then run this program with multiple input image sizes:

We now have the following numbers for memory usage:

At this point we get a sense of memory usage: there’s a fixed minimum, just for running Python and importing all the code, and then it seems like memory grows linearly as the number of pixels increases. 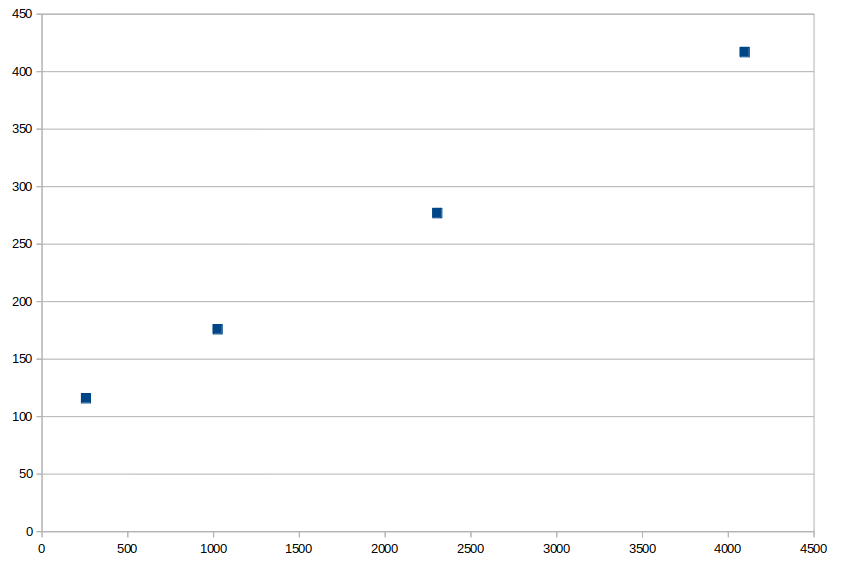 Given the memory usage seems linear with input, we can build a linear model using NumPy:

Now you can estimate memory usage for any input size, from tiny to huge.

Peak resident memory is not the same as peak memory usage

What we’re measuring above is how much memory is stored in RAM at peak. If your program starts swapping, offloading memory to disk, peak memory usage might be higher than resident memory.

So be careful if you start seeing peak resident memory usage plateau, as this may be a sign of swapping. You can use psutil to get more extensive current memory usage, including swap. You will however need to do some polling in a thread or other process as your program runs, since this doesn’t give you the peak value.

Alternatively, just make sure you gather your estimates on a computer with more than enough RAM.

While the model will often give you a reasonable estimate, don’t assume it’s exactly right. You’ll want to add another 10% or more to the estimate as a fudge factor, because real memory usage might vary somewhat.

Memory usage may not be linear

In many cases peak memory requirements scale linearly with input size. But that’s not always the case: make sure your model isn’t making false assumptions, and underestimating memory usage for large inputs.

When to consider optimizing memory usage

Once you have a good estimate of how memory usage varies based on input size, you can think about cost estimates for hardware, and therefore the need for optimization.

Large datasets combined with faster-than-linear memory requirement curve are a bad combination: at a minimum you’ll want some form of batching, but changes to your algorithms might also be a good idea.

Learn even more techniques for reducing memory usage—read the rest of the Larger-than-memory datasets guide for Python.

Next article: When your data doesn’t fit in memory: the basic techniques
Previous article: Too many objects: Reducing memory overhead from Python instances

Wasting time and money on processes that use too much memory?

Your Python batch process is using too much memory, and you have no idea which part of your code is responsible.

You need a tool that will tell you exactly where to focus your optimization efforts, a tool designed for data scientists and scientists. Learn how the Fil memory profiler can help you.

Sign up for my newsletter, and join over 6500 Python developers and data scientists learning practical tools and techniques, from Python performance to Docker packaging, with a free new article in your inbox every week.