Your server is running just fine, handling requests and sending responses. But then, ever so slowly, memory usage creeps up, and up, and up–until eventually your process runs out of memory and crashes. And then it restarts, and the leaking starts all over again.

In order to fix memory leaks, you need to figure out where that memory is being allocated. And that can be tricky, unless you use the right tools.

Let’s see how you can identify the exact lines of code that are leaking by using the Fil memory profiler.

In order to simulate a memory leak, I’m going to be running the following simple Flask server:

This is a simplified example of caching an expensive operation so it only has to be run once. Unfortunately, it doesn’t limit the size of the cache, so if the server starts getting random queries, the cache will grow indefinitely, thus leaking memory.

Since this is a trivial example, you can figure out the memory leak in this code simply by reading it, but in the real world it’s not so easy. That’s where profilers come in.

Let’s see the leak in action, and then see how Fil can help you spot it.

In order to trigger the leak, we’ll send a series of random requests to the server using the following script:

If we run the server using psrecord, and run this random request script, we can see how memory grows over time:

Here’s what the CPU and memory usage looks like after sending traffic to the server for a while: 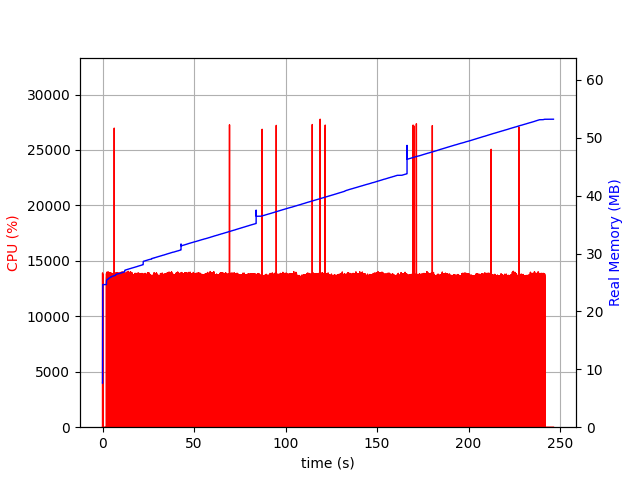 As you can see, the more queries, the more memory usage goes up.

Finding the leak with Fil

So what code exactly is causing the leak? For a real application with a large code base, figuring this out can be quite difficult.

This is where Fil comes in. Fil is a memory profiler that records the peak memory usage of your application, as well as which code allocated it. While Fil was designed for scientific and data science applications, it turns out that recording peak memory works quite well for detecting memory leaks as well.

After installing Fil by doing pip install filprofiler or conda install -c conda-forge filprofiler, I can run the program under Fil, and again generate some simulated traffic:

Eventually I hit Ctrl-C, and get the following report:

If you follow the widest, reddest frames towards the bottom of the graph, you’ll see that line 11 of leaky.py, the line that generates the HTML and adds it to the cache, is responsible for 47% of the memory usage. The longer the server runs, the higher that percentage will be.

If you click on that frame, you’ll also get the full traceback.

If you want to try this yourself, make sure you’re using Fil 0.9.0 or later (which in return requires pip version 19 or later). Older versions of Fil are much slower and have much more memory overhead when profiling code that does lots of allocations.

There are some caveats to using Fil:

Nonetheless, if you’re trying to debug a memory leak in your server, do give Fil a try: it will help you spot the exact parts of your application that are leaking.

Learn even more techniques for reducing memory usage—read the rest of the Larger-than-memory datasets guide for Python.

You can get faster results from your data science pipeline—and get some money back too—if you can just figure out why your code is running slowly.

Too much to learn? Don't know where to start?

Sign up for my newsletter, and join over 5900 Python developers and data scientists learning practical tools and techniques, from Docker packaging to testing to Python best practices, with a free new article in your inbox every week.