Fil: A memory profiler for Python on Linux and macOS

Your Python code reads some data, processes it, and uses too much memory; maybe it even dies due to an out-of-memory error. In order to reduce memory usage, you first need to figure out:

Fil is open source, and is designed for offline profiling. It has enough of a performance impact that you won’t want to use it on production workloads, but it can profile even small amounts of memory.

If you want memory (and performance!) profiling for your Python batch jobs in production, consider using Sciagraph.

Getting started with Fil

In this section you’ll learn how to:

Fil requires macOS or Linux, and Python 3.7 or Later. You can either use Conda, a sufficiently new version of Pip, or higher-level tools like Poetry or Pipenv.

To install on Conda:

To install the latest version of Fil you’ll need Pip 19 or newer. You can check the current version like this:

If you’re using something older than v19, you can upgrade by doing:

If that doesn’t work, try running your code in a virtualenv (always a good idea in general):

Assuming you have a new enough version of pip, you can now install Fil:

Using Fil for the first time

Then, create a Python file called example.py with the following code:

Now, you can run it with Fil:

This will run the program under Fil, and pop up the results.

In the next section, we’ll look at the results and see what they tell us.

Let’s look at the result of the Fil run from the previous section:


What does this mean?

What you’re seeing is a flamegraph, a visualization that shows a tree of callstacks and which ones were most expensive. In Fil’s case, it shows the callstacks responsible for memory allocations at the point in time when memory usage was highest.

The wider or redder the frame, the higher percentage of memory that function was responsible for. Each line is an additional call in the callstack.

This particular flamegraph is interactive:

To optimize your code, focus on the wider and redder frames. These are the frames that allocated most of the memory. In this particular example, you can see that the most memory was allocated by a line of code in the make_big_array() function.

Having found the source of the memory allocations at the moment of peak memory usage, you can then go and reduce memory usage. You can then validate your changes reduced memory usage by re-running your updated program with Fil and comparing the result.

In this section you’ll learn:

Fil vs other Python memory tools

There are two distinct patterns of Python usage, each with its own source of memory problems.

In a long-running server, memory usage can grow indefinitely due to memory leaks. That is, some memory is not being freed.

Fil, however, is not specifically aimed at memory leaks, but at the other use case: data processing applications. These applications load in data, process it somehow, and then finish running.

The problem with these applications is that they can, on purpose or by mistake, allocate huge amounts of memory. It might get freed soon after, but if you allocate 16GB RAM and only have 8GB in your computer, the lack of leaks doesn’t help you.

Fil will therefore tell you, in an easy to understand way:

This allows you to optimize that code in a variety of ways.

Fil uses the LD_PRELOAD/DYLD_INSERT_LIBRARIES mechanism to preload a shared library at process startup. This is why Fil can’t be used as regular library and needs to be started in a special way: it requires setting up the correct environment before Python starts.

This shared library intercepts all the low-level C memory allocation and deallocation API calls, and keeps track of the corresponding allocation. For example, instead of a malloc() memory allocation going directly to your operating system, Fil will intercept it, keep note of the allocation, and then call the underlying implementation of malloc().

At the same time, the Python tracing infrastructure (the same infrastructure used by cProfile and coverage.py) is used to figure out which Python callstack/backtrace is responsible for each allocation.

How to use Fil

In this section you will learn how to use Fil to profile:

You will also learn how to use Fil to debug:

You want to get a memory profile of your Python program end-to-end, from when it starts running to when it finishes.

Let’s say you usually run your program like this:

And it will generate a report and automatically try to open it in for you in a browser. Reports will be stored in the fil-result/ directory in your current working directory.

You can also use this alternative syntax:

If your program is usually run as a module:

To measure peak memory usage of some code in Jupyter you need to do three things:

Jupyter notebooks run with a particular “kernel”, which most of the time just determines which programming language the notebook is using, like Python or R. Fil support in Jupyter requires a special kernel, so instead of using the “Python 3” kernel you’ll use the “Python 3 with Fil” kernel.

There are two ways to choose this kernel:

In one of the cells in your notebook, add this to the cell:

You can now do memory profiles of particular cells by adding %%filprofile as the first line of the cell. 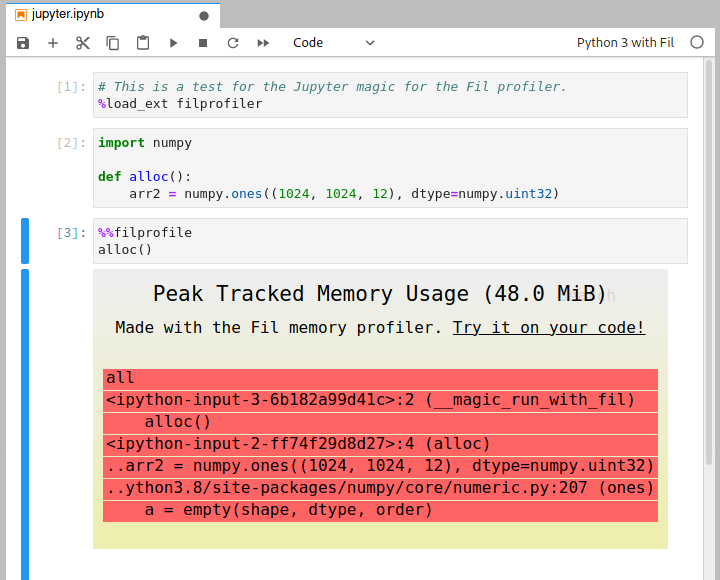 Profiling a subset of your Python program

Sometimes you only want to profile your Python program part of the time. For this use case, Fil provides a Python API.

Important: This API turns profiling on and off for the whole process! If you want more fine grained profiling, e.g. per thread, please file an issue.

1. Add profiling in your code

Let’s you have some code that does the following:

You only want to get memory profiling for the run_processing() call.

You can do so in the code like so:

You could also make it conditional, e.g. based on an environment variable:

2. Run your script with Fil

You still need to run your program in a special way. If previously you did:

Now you would do:

Notice that you’re doing fil-profile python, rather than fil-profile run as you would if you were profiling the full script. Only functions running for the duration of the filprofiler.api.profile() call will have memory profiling enabled, including of course the function you pass in. The rest of the code will run at (close) to normal speed and configuration.

Each call to profile() will generate a separate report. The memory profiling report will be written to the directory specified as the output destination when calling profile(); in or example above that was "/tmp/fil-result". Unlike full-program profiling:

Typically when your program runs out of memory, it will crash, or get killed mysteriously by the operating system, or other unfortunate side-effects.

To help you debug these problems, Fil will heuristically try to catch out-of-memory conditions, and dump a report if thinks your program is out of memory. It will then exit with exit code 53.

Fil uses three heuristics to determine if the process is close to running out of memory:

Sometimes the out-of-memory detection heuristic will kick in too soon, shutting down the program even though in practice it could finish running. You can disable the heuristic by doing:

Is your program suffering from a memory leak? You can use Fil to debug it.

Fil works by reporting the moment in your process lifetime where memory is highest. If your program has a memory leak, eventually the highest memory usage point is always the present, as leaked memory accumulates.

If for example your Python web application is leaking memory, you can:

Fil will then dump a report that will help pinpoint the leaking code.

For a more in-depth tutorial, read this article on debugging Python server memory leaks with Fil.

By default, Fil will open the result of a profiling run in a browser.

As of version 2021.04.2, you can disable this by using the --no-browser option (see fil-profile --help for details). You will want to view the SVG report in a browser, since they rely heavily on JavaScript.

If you want to serve the report files from a static directory using a web server, you can do:

Fil will track memory allocated by:

Still not supported, but planned:

In general, Fil will track allocations in threads correctly.

First, if you start a thread via Python, running Python code, that thread will get its own callstack for tracking who is responsible for a memory allocation.

Second, if you start a C thread, the calling Python code is considered responsible for any memory allocations in that thread.

This works fine... except for thread pools. If you start a pool of threads that are not Python threads, the Python code that created those threads will be responsible for all allocations created during the thread pool’s lifetime. Fil therefore disables thread pools for a number of commonly-used libraries.

Fil can’t know which Python code was responsible for allocations in C threads.

Therefore, in order to ensure correct memory tracking, Fil disables thread pools in BLAS (used by NumPy), BLOSC (used e.g. by Zarr), OpenMP, and numexpr. They are all set to use 1 thread, so calls should run in the calling Python thread and everything should be tracked correctly.

This has some costs:

Fil does this for the whole program when using fil-profile run. When using the Jupyter kernel, anything run with the %%filprofile magic will have thread pools disabled, but other code should run normally.

While every single allocation is tracked, for performance reasons only the largest allocations are reported, with a minimum of 99% of allocated memory reported. The remaining <1% is highly unlikely to be relevant when trying to reduce usage; it’s effectively noise.

No support for subprocesses

This is planned, but not yet implemented.

See the list in the page on what Fil tracks.

No support for third-party allocators

On Linux, Fil replaces the standard glibc allocator with jemalloc, though this is an implementation detail that may change in the future.

On all platforms, Fil will not work with custom allocators like jemalloc or tcmalloc.

If you need help using Fil: